How The Men’s Table helped Kevin deal with his grief

After a tragedy, Kevin turned to grassroots men’s mental health support group The Men’s Table to help with his grief and find purpose in life once more.

“I awoke at 2.30am one night with car headlights shining down the driveway. It was the police. They told me my son had been in a hit and run accident. Shortly after I walked into the hospital, the first words someone said to me were, ‘We’re so sorry’.

“I was lost. My identity was stripped away as a father. My instinct as a dad was to protect my children, and that role had been taken away. I felt like a failure. I couldn’t get out of bed.”

Take your seat at The Men’s Table

The numbers are shocking. Six men a day commit suicide in Australia. 84 times a day an ambulance is called for a man who has attempted suicide. And the number who have suicidal thoughts is estimated at one in 20.

One contributing factor is men’s social isolation. The Men’s Table is a grassroots organisation that works to improve men’s mental health by helping them build meaningful male friendships. The model is simple yet effective: once every month, men across Australia meet for a meal to share openly about their lives, their challenges, their highs and lows with a group of 12 they learn to trust and respect. The monthly cycle of meetings helps men develop familiarity, awareness of their feelings and fluency in sharing them.

The Men’s Table recently received a Community Grant to help start more groups on the NSW south coast; since then new ‘Tables’ have opened in Albury, Tumbarumba and Bodalla. The organisation doubled its number of Tables in 2021 to 48, with more growth planned in 2022.

What men say about the benefits of sharing

“When one man shares feelings and vulnerability, he opens the door for another man to walk through it with his own sharing of authentic feelings,” explains The Men’s Table co-founder Ben Hughes.

The following are testimonials from Men’s Table attendees: 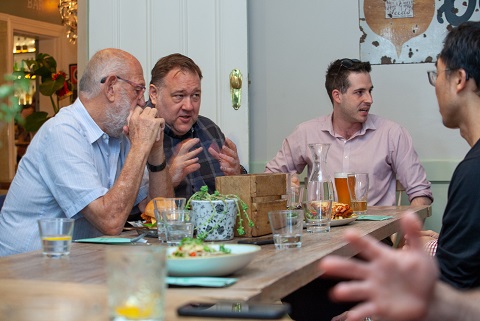 Kevin learns to deal with his grief

Kevin’s son’s death started a chain reaction beyond his own despair. “My wife and our other boys suffered immensely with grief,” he relates. “Being a small business owner I couldn’t get out and build my business, and so we came under immense financial strain. I ate badly and put on weight.”

Despite everything that was happening Kevin knew he had to make getting to his Table every month a priority. “Amidst the raging river that was sweeping me along, out of control, I was desperate to have something to cling on to, like a log or a rock I could rely on to hold steady,” says Kevin. “My Men’s Table was one of those stable places. To know my Table was there every month, and that I could go along and share what was going on for me without judgement, was reassuring.

“The men at my Table gave me a unique kind of support. To start with, I got to offload some of my burden with people outside my immediate family. They listened and at times when I asked for it, offered useful perspectives.

“Apart from the support I got, it was also nice to hear what the other men were going through in their lives. This was a great reminder that it wasn’t all about me. Listening and supporting them was a real help to me, too.

“There wasn’t one turning point that helped me get through. It was an accumulation of things; different things people shared along the way; a book I’d read. Probably more than anything, I learned to be open about it.”

About the Community Grants Program

Every year the Sisters of Charity Foundation provides grants of up to $15,000 to small not-for-profits across Australia, like The Men’s Table, that use clever ways to fight poverty, loneliness, suffering and oppression. We rely on the generosity of our supporters to fund our Community Grants Program.

Feeding the community with Open Table

People experiencing food insecurity and isolation in the Melbourne suburb of Fitzroy and its surrounds turn to Open Table for fresh, healthy food and social connection.